I read an article before we went on vacation about Simon Cowell saying he hadn’t used his phone in 10 months and how it had changed his life. Now, given that he seems to be a pretty successful man and has lots of commitments I presume he’s able to do that because his assistant or someone is answering his phone but still… I thought that made a lot of sense.

He said he was more present with his family.
He was less distracted and felt it improved his mental health.

Now I don’t think any of us are shocked by this news. I sure wasn’t but I am torn. Not so much about the apps on my phone but the phone itself. I do need it for my business and unlike the cool kids I do actually talk on it.. perish the thought.

Then we went on vacation. Lowi & I and we were not able to access the world like we can in the US and it was glorious.

Aside from not talking to Johnny Armani, Swaggy J, you know, the hubs as often as I do when home, I thought it was awesome. I didn’t watch a single second of TV, because it wasn’t an option. I posted a photo of our day to Instagram once a day and I emailed my husband daily. Otherwise, I was in the sun, in the water and I read a book and a half.

I say half a book because after a trip snorkeling and the adults took turns guarding our granola bars (actually wallets although after seeing us all eat I think it’s 50/50) I started reading Lowi’s book and got hooked. Soon I was trying to bookmark my place in her book. Now, what’s the big deal about that? Let’s keep in mind we were in a locale that was hot, we were in the water, applying sunscreen and drinking fluids at all times.

This book looks like it took a few swims as well. 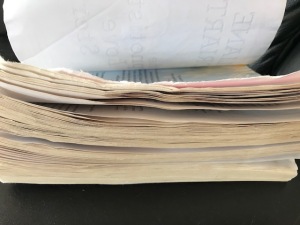 I came home and I was not so interested in all that stuff any more. Yes, I still post to Instagram but I have deleted the Facebook app from my phone and over the weekend I wasn’t online as much as I was before our trip. I hope that’s a trend I can keep going. Much like Lowi drinking rum in everything (and I am not sure I believe that she skips it in her morning juice) I am going to see how being a little less plugged-in goes.

And just to name the elephant in the room, I realize the hypocrisy of what I am saying since we have a blog. Our entire existence for most of you who follow us is virtual. So am I biting the hand that feeds me? No. I am just choosing to let social media be my tool instead of feeling like I’m its tool. 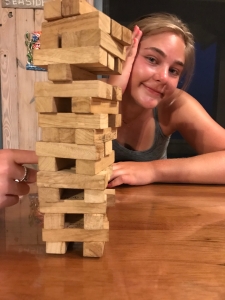 When you get unaccustomed to responding to every bing, chirp, ding and bell, it feels really good. You have fun conversations. You play stinky board games you find on the shelves of a rental property and you pinch hit and jumble your Boggle letters in a ziploc bag when the lid is missing. That and Lowi is a boss at Boggle so you’ve been warned.

Unplug friends, but only after you read our blog.