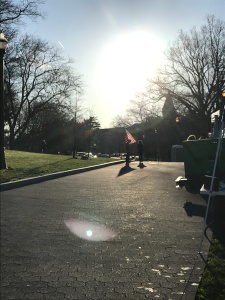 A few weeks ago I may have shared that I was getting the privilege of being the creative director on our first running race movie of the year. We’ll glide over the fact that I was getting this kind of control because I was injured and not running. The important thing is that Swaggy J was handing over the Go Pro and full cinematic direction to me.

Sweet! I don’t usually get this honor because I am usually running and when I am I have no interest in carrying anything extra like a camera and I always forget to take photos even during a normal training run.

I already had some ideas of how I thought I’d like to film it since the race was hosted on the campus of my alma mater — The Ohio State University. And, yes, we include THE. It may possibly be branded or tattooed on you upon entrance but I cannot tell you where.

Carmen, Ohio pinky swear and all.

We were on our way to the race and already I was wondering how this handing over of control was going to go since I wasn’t even driving. I had fully planned on being the driver for this event since a) I wasn’t running b) I was the only one who knew where we were going c) I was supposed to be in charge, right? 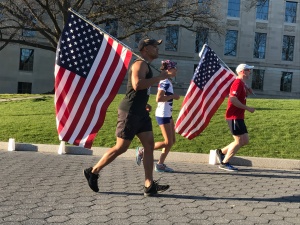 On our way, while I was being chauffeured, Swaggy started giving me “tips” on possibly taking a photo of the sunrise and where the best shots on The Oval would be, as if I didn’t already know. Ahem, graduate remember?

The day progressed much the same. I would meet up with Swaggy J to do an interview mid-race and before it could really get going he’d take the camera out of my hand. Or he’d have “another idea.” He even interviewed the race doctor himself because apparently he thought in his 12-hour race he had time on his hands. I, meanwhile, was busy watching the grass grow.

Naturally, when it came time to sit down and actually put the movie together I thought maybe I’d get to do it my way. Eh, well…

I started on the project Saturday afternoon. I figured I’d better get to it since John is running another race this Saturday. I don’t want a backlog of photos and video footage. It’s been a while since John took over film-editing responsibilities. Back in the day, it was my baby. Now I just jump in when he needs a technical assist.

I started the project and after I had a good start I asked him to take a look and see what he thought. He had some “suggestions.” Then Sunday morning he tells me, “Hey,  I had an idea about this one part of the movie.”

I shot him a look and said, “I thought I was getting to make this movie?”

He replied, “It was just an idea.”

Swaggy headed off to work and I thought I’d better get this Oscar-worthy film completed before I get anymore advice.  All this time I thought I was the control freak. Guess there may be another one in this house.

In case, you want a small peek at my skills, check this out: