Just because the last race of the season has come and gone doesn’t mean the Torture Report is going weak on you! This week did not disappoint in the torturous qualities but I am getting ahead of myself. The Nashville Ultra cannot be ignored. I know Lowi gave you her take last week but she was a bit too modest.
Many people follow the Coach to 5K running plan but my sister has always been an overachiever and instead went from sort of training to 50K overnight!!

The race promptly began at 7 am and we were off. It was a cool morning and we were happy to be on our way. Before too long into the race we were finding all kinds of downhills to help us pick up speed. It makes you feel like you are much faster runner than you are. Around 3 miles in, my crew came herding down a rather steep hill and subsequently passed and, likely terrified, a fellow runner at our cacophonous passing. But before too long we had added a fifth amigo to our 50K posse.

Mariah, became our adopted family member or our ultra hostage, it’s still unclear if she wanted to run with us or she just unfortunately had the same pace that we did. In no time, she was one of us and we ran together, walked together, and through the miles she became part of the family.

As luck would have it we managed to wind through 17 miles without too much fanfare and we were all pleasantly surprised even without typical training for some of our group we were all still hanging in there.

But as with any race that goes beyond 20 miles, it starts to get interesting. We started to slow, our aches and pains started to show up, and it’s safe to say that Sydney peed at every aid station, Porta-Potty and wooded area we passed. 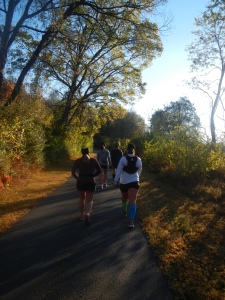 Eventually we made it to the 24-mile mark and were officially headed for the finish and not a person in the group was disappointed that the fun was close to the end. Little did we know that the excitement was only getting started. Around mile 26 Sydney, a first-time ultra runner with only one half marathon under her belt, decided she couldn’t hang with us anymore and she took off like a jackrabbit in the woods.

By this time our posse of five had deteriorated to three. We had lost Mariah and Sydney to the speed-demon disease but Lowi, Swaggy and I were committed to getting each other to the end. 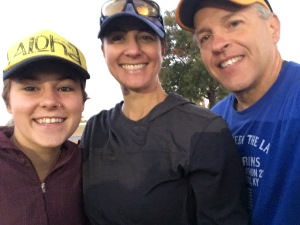 When we arrived at the 29-mile mark the idea that we could bring this race in sub 8-hours became clear. Lowi dug deep and we ran in spurts for the last couple of miles. When we crested the top of the last hill about 50 yards from the finish and saw the race clock read 7 hours 59 minutes 13 seconds. Lowi looked at me and said, let’s go for it!!!
We made it in just a whisper under 8 hours.

In my humble opinion, success!!

What, however, was not a success was my foray into hill training with a real legit ultra runner over the weekend. I told you a week or so ago about my fortuitous connection with a seasoned runner who was willing to show me around Great Seal State Park near Chillicothe.

We met on Saturday at 7 am and it was a mere 28 degrees when we headed out onto the trail. I knew that Great Seal was full of steep climbs and descents but it turns out I didn’t know the half of it.
My leader was out for a 25-mile training run and offered to take me on an 8-mile spin and drop me back at my car. I thought, “Great, how bad can it be?”

Ummm, well it wasn’t bad per se. But it was really difficult. Within the first mile we were climbing Sugarloaf Mountain. It was steep and with all the leaf cover on the park, I couldn’t really discern a path of any kind. Thankfully, I wasn’t directing this adventure.
When we got to the top I was breathing hard and I was no longer cold but it really was just beginning.
Over the next 9 plus miles we climbed and descended time and again. I tripped, stubbed my toes (yes, toes) on rocks, roots and whatever else was hidden under this deep blanket of fallen foliage.

About 3 miles in, while she was telling me about the park and its terrain she mentioned she is a former Marine!! It became clear to me that John was, in fact, trying to kill me. He threw me out into the wilderness alone with a woman who is tough as nails.

But I was already in it so if ever there was a suck-it-up-buttercup moment — this was it! So I did. I wasn’t fast and she kindly waited for me to catch up a few times and was very encouraging.

More than three hours later we returned to our starting point. I have no idea how we returned and I am not sure I could navigate it all again alone, especially not with all the leaves.

What I am sure of is:
As hard as it was I will go back. I need to.
I will ask to run with her again because I need to be pushed.
I have found the true limit of my skill and fitness. It’s not often you stumble, trip and misstep right onto it but I did, repeatedly, on Saturday and it was humbling.

The only way to get better is to push yourself way out of your comfort zone. And I was. I was so far out of comfort that all I could do was be present and move forward. There’s a lot less panic that way.

When I got home I was spent and exhausted. I felt a little down on myself that I hadn’t been able to manage it any better. Then I downloaded my Garmin and realized in around 10 miles we had climbed more than 5,000 feet. For a Ohio flatlander that’s not nothing.

So what’s next?
As I promised myself earlier, I will still be taking the rest of the year off from formal training. And especially after my weekend I know I have a lot of work to do and I need to be mentally and physically rested to embark on that come January 1.

It seems 2017 is shaping up to be a year of fear-facing and growth. It’s a real drag how those two things go together. But there it is.