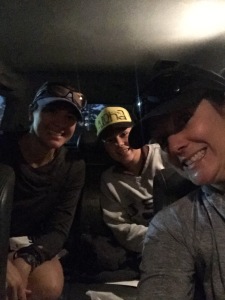 If you saw our blog yesterday you know we finished the Nashville Ultra.  Yes, ALL OF US.  I know there were some concerns about my daughter, Sydney, and me actually participating, let alone finishing, but as I have said before, we are a stubborn bunch.

I also want to preface this blog with the fact that I am sleep-﻿deprived and I just got off of a plane from Nashville.  I haven’t had a lot of time to decompress or reflect on the actual race so the following is my attempt at sharing our experience with you through my lens.

The morning was brisk and dark as we pulled into the parking lot at 6:15am still eating our oatmeal.  Sydney and I are nothing if not prepared.  Well, there was that moment the night before when she asked about socks and the morning of when she realized she didn’t actually have a water bottle.  Who needs a water bottle when your mom, aunt and uncle are all carrying one?  Thank you G for providing the oatmeal and drop bags full of bars, sandwiches, Tylenol and duct tape.

Back to the race.  There were actually five of us who signed up for this crazy adventure, but only four of us were planning to run together.  The fifth member of our elite party stood with us at the start, but quickly waved goodbye.  He was on a mission to crush his 50K time and who were we to stand in his way?

At 7am we were off and running.  The first 18 miles were rolling hills which were awesome for the first 9, but the reverse was not nearly as entertaining.  We made a new friend at mile 2 as I am pretty sure our group sounded like a herd of elephants as we ran down the first steep descent.  I am not sure she wanted to be friends as much as she just didn’t want us to run her over.  We adopted Mariah at mile 5 and all of us alternated running with her throughout the majority of the race.  Swaggy J even got her phone number so he could send her photos.  Swaggy J is not only a fabulous crew chief and coach, but he is also a media expert.  He literally texted our family updates throughout the entire race and has filmed the entire debacle on his Go Pro.  Looking forward to that movie coming to the big screen!

I wasn’t sure how I was going to feel during the race since I wasn’t as prepared as I wanted to be, but it went better than I expected.  I honestly feel like if it had been on a trail I might have felt better toward the end.  Those 18 miles though were tough on my hip flexors.  In fact, they are still not very happy with me several days later.

While I had a couple low points where I needed some sustenance I discovered the benefits of Sprite.  This is my new favorite pick me up at the aid stations.  My stomach handles it well and it gives me the sugar boost I am looking for. Sydney and Swaggy J, however, discovered the benefits of pizza and donuts.  They devoured the unlikely mix at the halfway point and at the finish. My lowest point however came with 5 miles to the finish.  My feet were hurting and my hip flexors were on fire.  Interestingly enough this was the same time that our little ultra runner in the making had a fire ignite within.  She took off running and never stopped until she finished the 50K.  G and Swaggy J refused to leave anyone behind so they continued to walk with me those last miles.  At mile 29 I reached the point where I wanted to be finished.  I only had small bursts of running left in the tank, but it was enough for us to get to the finish line.

I feel like this race was the restart that I needed.  I may have finished the 31.2 miles, but I can assure you I felt it.  It was a totally different experience than my last ultra with G.  A 50K is so much easier to get your brain around than 50 miles not to mention much shorter.   I also wasn’t as emotionally invested in this race although there was no way I was going to quit.  The downside of not being as invested is that I also didn’t feel the same exhilaration as I did with the 50 miles. Don’t get me wrong, I definitely feel satisfaction in completing this race, it’s just not the same.  With the exception of those last 5 miles, this race was light-hearted and fun.  We enjoyed the Tennessee scenery and laughed a lot…especially at Sydney!  Our favorite moment came around mile 19 when Sydney had to pee AGAIN.  She jumped into the woods and just as she was ready to drop her shorts, two men asked her if she was okay and if she needed any help.  She politely declined and informed them that she was just trying to go to the bathroom in the woods.  Meanwhile, the three of us could barely stand upright as we were laughing uncontrollably at her expense.

﻿
I want to give a special shout out to G and Swaggy J for sticking it out with me and coaching me all the way through.  And to Sydney for being a total badass and showing her mama how it’s done!  Looking forward to our next ultra.