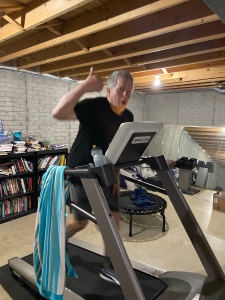 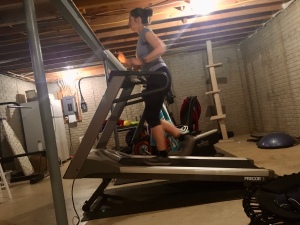 Just how hard can a mile be?

That has been the question floating around amongst the Miller, Barton, Brown and Saghi families since Easter. And we’ve all discovered our own personal answer. I think it’s safe to say when bravado and ego are left behind everyone’s answer is the same: HARD.

More specifically, harder than anyone ever imagines.

It’s a challenge that is short enough in its duration that it’s deceptively simple for the mind. The body, however, has a much different experience.

In fact, even last Friday, nearly two weeks since I took the challenge on, I pondered trying it again. The pondering quickly ended because my body momentarily reminded me of how it felt. Last week, Lowi shared the story of how this challenge ended in Colorado. Let me tell you today how it started in Ohio.

One of the ultrarunners we follow on all the things (Instagram, Youtube etc) is Jamil Coury and he has a treadmill that will incline to 40%, which is outrageous. Someone asked him how fast he could run a mile on it at 40% so he decided to find out.

And this got John thinking …

He decided to go first to let me have the advantage of knowing how hard I needed to push to beat him. From the sidelines of the treadmill it didn’t seem like it would be THAT hard. I mean he wasn’t moving that fast. But he sure was sweating a lot. I chalked it up to John being a champion sweater. He stepped off the treadmill and while it looked hard he did not quite do it justice.

Then I climbed on. I knew about .10 in that I was in trouble. I already wanted to quit and I thought, how did he make this look so easy? I continued on with Foo Fighters music blaring in my ears and nature scenes on the television and all the while John encouraging me. I wanted to quit from the very start. There haven’t been many things in my life that I can say that about but this one, hands down, I wanted to quit basically from go. It was unrelenting in difficulty. I thought that my strategy of a steady pace of 3.0 mph and increasing toward the end would allow me to beat my dear, sweet husband. But it did not. That was actually the worst part, going 3.4 mph and realizing that I already passed his time. That last minute nearly broke me because I already knew I was the first loser.

John finished in 18:44 and I completed it in 19:41. We shared this challenge, the betting line ,as well as the video footage with the rest of the family via text. Because what else says Happy Easter other than a feat of physical endurance?

It didn’t even get much of a response at first. A couple obligatory emojis. You know the equivalent of “k” when OK is just too much work. Then it morphed into, “meh, so you walked a mile with a little incline. Good job (losers).”

We got questions like, it’s only a mile? Hmm? Which was code for what kind of sissy juice are you flatlanders drinking today?

I could feel their derision here in Ohio all the way from Colorado.

And now you know the beginning of the story.