I am not what you’d call an enthusiastic celebrator of St. Valentine. It’s not my gig. It’s not that I am anti-,  I’m not just pro-Valentine either. So when asked several times yesterday morning what I was doing for Valentine’s Day I grumbled a little and shared one variation or another about how I just wasn’t that into it.

As the day went on, I had a session with my coach and she asked what I was doing and I gave her the same sort of answer. She said, “yeah. yeah my husband and I said, ‘I love you. I love you too.’ Just like we do every day.”  But she went on to add,  it’s important to feel the love no matter what day it is. Feel the love.

I heard her but I kind of blew it off but often what she says to me is akin to putting ice cubes in a plant. It sits on the surface for a bit and then slowly melts and sinks in. And when it does it happens so slowly that the integration is deep.

The idea of feeling the love kind of swirled around on the surface. And I went about the rest of my day. I realized I have kind of taken some sort of pride in my stance against Valentine’s Day. As if that somehow made me better or more evolved. I didn’t so much have this conscious thought before but I realized some of it was, in fact, true. And that’s silly because what I was saying, in effect, was that I was above love. Which I most certainly am not.

What I really am is a non-traditional appreciator of love whether it’s Valentine’s Day or not. After I wrapped up my appointments for the day, John and I headed out for a late afternoon run. As we got started he said, Happy Valentine’s Day. He said it with a laugh because, well, he knows how I feel about the day so as any longtime life partner would, he likes to needle me a bit. 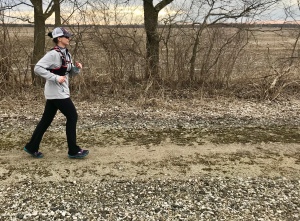 Off we went on a nice, quiet run. We talked a little. We ran a lot and often were comfortable in the silence. Together and somewhat alone all at once. As we got toward the end of our run I thought this is exactly how I would want to spend the day with the person I love most. It may not be roses, wine and the traditional fair but it’s how I feel love.

A friend once described my relationship with running as it being my oxygen. I’d never considered that before but it felt true and novel a the same time. It seems only fitting that I’d spend a day like yesterday with the two things that make life both possible and worth living.