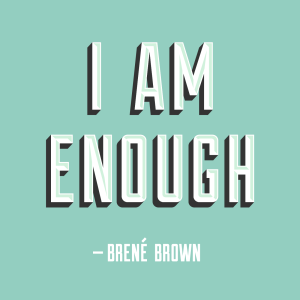 Enough is a word we throw around a lot on our blog.

We talk about being “good enough,” and we sometimes say “enough is enough.”

I’ve realized that while they are used in different contexts they really draw the same line in the sand.

It’s the tipping point for good things to start happening. When we discover, finally, we are good enough, the battle within ourselves ceases. And when we decide in relationships with others that “enough is enough,” better things start to happen.

What we are willing to tolerate, essentially, teaches not only others, but ourselves, how we want to be treated. If someone in our life is always putting us down, speaking unkindly to us and we take it, we are saying it’s OK. And, as much as it’s easy to miss, when we talk harshly to ourselves, we are saying that’s OK too.

When we reach that point where we demand something greater, only good can come from that point on. We do have some momentum to contend with because we’ve been moving in one direction for some time now. It will take focus, mindfulness and awareness to change the trajectory but it can be done. And it’s not as hard as we probably even think.

It’s all about habits that we create and habits that we release. When we first start something new like drinking more water, we may need to set reminders on our phones, fill a large pitcher with water in the morning with the goal to drink it all before the day’s end. But within days often we start to notice that being well hydrated feels good. And then soon we fill the pitcher of water without having to be reminded. Before long those phone reminders get edited to help us with the next, new positive habit and within a few weeks we’ll forget how insurmountable we thought it might be.

What have you had enough of?
When will you decide you are good enough?