(G): What a week. It’s been so full of nothing, something, and everything that I feel at a loss for what to tell you first so I guess I will start at the beginning.
I experienced gait analysis and a physical therapy assessment last Wednesday. It was eye-opening, slightly shaming and makes me want to bar anyone from ever photographing me while running again.
Part of the process involved me running on the treadmill. That part I was super, duper OK with. It felt great. And I mean that in the Tony the Tiger way, GRRREEAAATT!
While I am painfully out of shape I ran for 40 minutes. Woot, woot!

That’s about the last awesome thing I am going to share. 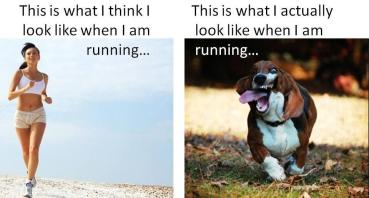 First off, when someone puts a mirror in front of your treadmill and then you start to witness repeatedly and unavoidably how awkward and uncoordinated and uncool you are when you run, well it’s enough to almost make you quit. Almost.

Every time I tried to fix one of the several things wrong with the way I move, breathe and stand it created 14 other equally odd tics.
To wrap it all up for you in a nice box with a bow, I have lots of things wrong or lots of areas for improvement. Depending on whether you are a glass half-empty or half-full kind of person will predict which way you think about it.

I mostly just want to know when the $%^ I can run again, already?!

My frustration level is high. I know I’ve said it before. It was true then and it gets truer (not sure if that’s a word but it is now) every single day.
I have been doing hundreds of repetitions of exercises and stretches. And now I have even more thanks to additional therapy. And I am grateful but I want to be gratefully running.

Saturday, I felt really good and I decided to go to the park to walk some and before I knew it we had walked 7 miles. It was the best I have felt in — 47 days. Yes, I am counting.
No pain, no issues just glorious outdoor movement. Then Sunday morning, the pain was back. I was thinking earlier that I was phoenix from the ashes. I may just, in fact, be the ashes.

A friend told me yesterday that I needed to take it easy and not be so hard on myself. And while I appreciate what she’s saying, the issue is that all this rest is making me feel awful. I don’t feel like myself. I have been deprived of endorphins for far too long.

Add to this delightful mental state that I am putting on weight like a sinking ship takes on water. The situation is dire but, of course, all that direness makes me want to eat. 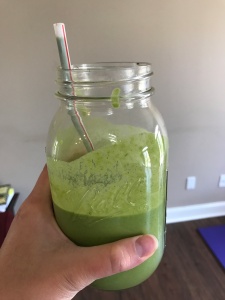 On Saturday, I got serious and decided I needed to take my focus off food and the best way to do that is to make what I eat rather mundane for a few days. So I opted to have a smoothie for breakfast and lunch and then a good, healthy dinner. I didn’t need to ponder what I could have for lunch when it had already been decided — a green monster smoothie. I am slowly learning to like smoothies but mostly I like that it’s calorie and portion controlled. Once it’s gone, it’s gone.

And the truth is I don’t need more food. I just want more.

I imagine that someone out there is about to send my husband a hockey mask and a protective cup since he’s living with a hangry, frustrated runner who’s not running. That’s not entirely out of line. Feel free to message me for our address.

Until next week, I will be the girl with RBF who is drinking something green through a straw.

(L)  I hate to say it after G’s rant, but I am at Day 15 without pain.  I told you last week that I was back on the wagon and running again.  Sadly, I was only able to  run one day last week.  My oldest daughter  graduated from college on Friday and from Wednesday until yesterday we were going nonstop.  Theoretically, I could have run, walked, lifted weights or done something on Monday, but I was tapped out.  I was up at 3:30am to take my middle daughter to the airport and after the crazy week we had I just couldn’t get it together.

Our family did, however, begin a  group text so we can motivate and hold one another accountable for working out.  For the last 24 hours it has mainly been a source of entertainment.  In fact, our middle daughter let us know she had arrived safely back in Nashville with this group text: 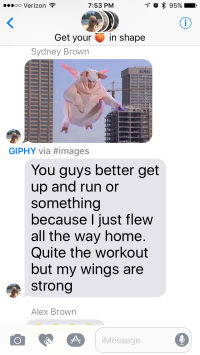 Needless to say we all got a good laugh out of it, but none of us actually put our running shoes on today.

It’s a new week and pigs are flying, which is ironically what I looked like when I had my gait analysis.