(G): Last week I told you I was going to double down on strength, flexibility, rehab and my diet while I am not running.
I did and it made a big difference in my attitude. I felt much happier with an intense workout of another sort and a renewed focus.
I worked hard and being tired was not a good enough excuse to skip a workout even though I wanted to. Then I went to Tennessee for the weekend and most of my good habits were hit with a serious pause.

We drove for about 8 hours on Friday to arrive in Wartrace, TN for a race John did on Saturday.

I did manage to get some rehab exercises in once we arrived around 8 p.m. but I was pretty tired. Saturday I stretched at aid stations but crewing for a race is surprisingly more work than you’d think. By the time John finished at just under 10 hours and we drove 90 minutes to Chattanooga I was exhausted.

The real collapse of my newfound focus was on Sunday. It was John’s birthday, so we had a great brunch, which was fairly healthy and even if it wasn’t it was so good I don’t even feel guilty. If you find yourself in the Chattanooga area, go to Sluggo’s. I insist. 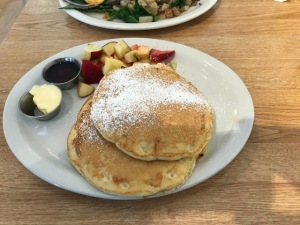 The serious, collossal breakdown hit when we wandered into the Brewhaus. We had beer, of course, and veggie brats with slaw and fries. We walked around for a while after, which wasn’t nearly enough to burn off what I had consumed and then had more beer and snacks because it was a birthday!!!

Basically, I ate like I would the day after an ultra only — I didn’t run an ultra I had just watched one and drove around a lot.

Yesterday, we drove home and in a 7-hour trip you need snacks so again I ate chips, pretzels and some Chipotle.

Today, it’s back on track and possibly a detox is in order after all that consumption. Even more exciting is that Wednesday I have my gait analysis and hopefully am one step closer to running.

(L):  If you will recall, last week I was singing praises because I was finally pain free.  I told you that I was going to try to start running if all went well.  On Wednesday I got a text from one of my running partners, Melissa, asking if  I wanted to run on Friday morning.

She said, “I could painfully run on Friday.”

I replied, “painfully or probably?”

She decided it would most likely be both as neither of us had been running.

I am happy to report that on Friday we ran /walked 3 miles.  I stretched for about 20 minutes prior to my scheduled run.  I find that downward dog along with some other yoga moves that I can’t remember the names of really help loosen and lengthen my back muscles. I was a little apprehensive as I wasn’t sure what to expect, but it felt so good to be running again.  At about mile 2 I started to feel some tightness in my back, but not pain so I continued on. Once I got home I went back to the mat and stretched again.  I followed it up with some ice and I felt great.   By Saturday, I had some soreness in my legs, but that was just my body wondering what I was up to after all the rest and relaxation I had given it.

Melissa and I decided to run 5 miles on Sunday since our Friday run had gone so well.  Okay, the reality is we want to run the Slacker half-marathon on June 24th and once again we are down to the wire.  We need to train and quickly. 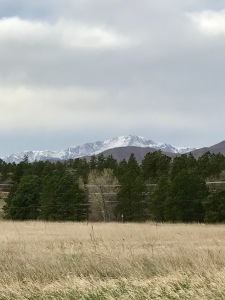 So, on Sunday we met at the trail at 6:30am for a 5-mile run.  It was perfect running weather and there were lots of opportunities for photos since we weren’t breaking any speed records.

We have just under 7 weeks to train for 13.1 miles.  This will be my 5th year in a row to run the Slacker so I don’t want to miss it. However, I have promised myself that taking care of my back is the priority.  I am cautiously optimistic and stubbornly determined after this weekend.  I am going to continue training and by next week I should have a better idea of how how my back is holding up.