These kids are going to break me yet.

Take me back to carseats and diapers any day. This whole parenting adult children is definitely not for the faint of heart. 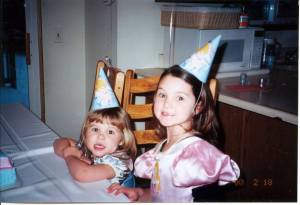 I remember how challenging those early years were and they were HARD. When I think about bringing our second baby home to a house with a 22-month-old and a puppy it still makes me a little crazy. There were so many all-nighters with sick kids and ours were always pukers. Someone else’s kid might feel a little sick, but ours would always throw up and all over the carpet if we were really lucky. I remember one specific week when my older girls were toddlers and they both had the puking flu at the same time. I finally positioned myself on the sofa right between the two of them with two trashcans. There really should be some kind of Guinness Book of Records just for parents because I was able to catch the vomit from both of them simultaneously on that sofa. What can say? I am skilled at multitasking.

The reality is that whatever happened I could usually fix it: lipstick on the carpet, an entire bottle of gel in the hair, coloring on the wall, the cutting off of the pony tail, skinned knees, hospital visits that resulted in stitches, spilled drinks, even calling 911 on “accident” — we handled it.

As they got older there were sporting events that overlapped, snacks that needed to be bought, sleepovers that went awry, friends that needed fed, special diets, help with homework, concerts, youth group, conferences, fights, slumber parties with 10 extra girls in the house, more all-nighters and even tears as they realized friends can be mean.

You think somedays that you won’t make it and other days you hope it lasts forever. Being needed like an infant needs you is the most overwhelming experience. It’s terrifying and humbling and the love you feel threatens to make your heart burst at times. Then, slowly, it becomes a tug of war. You spend years pulling them close and step by step they learn to walk on their own. It’s such a slow process that you assume by the time they are ready to fly on their own that you, too, will be ready for them to leave. You are lulled in to this false sense of understanding that when they finally leave the house they will be strong, independent, self-evolved, able to handle anything that crosses their path and obviously you won’t be needed in the same way anymore.

This is where it gets muddy. There are varying degrees of how much they still need you. We often expect a financial need unless they are out making a living as soon as they graduate from high school, but what about that emotional support? Of course, we expect the occasional phone call about friends, school, work, etc…but what happens when life kicks them in the teeth? What happens when their car is broken down on the side of the road and you live a thousand miles away? What happens when that boy breaks their heart and the hurt is so deep your own heart is aching? What happens when they call and they are out of money (okay, I can fix that), they were rejected, they lost their courage, they lost their job, they have food poisoning, they are lonely, they feel like they don’t have a friend in the world or they are unsure of their next move.
I can talk a good talk, I can give them perspective, and I can put money in their bank account, but I can’t fix it anymore.

We are within driving distance of our oldest so this last week when she called and she was hurting we got in the car and drove to see her. We hugged her, talked to her, gave her our best advice, and took her and the roommates out to dinner. She was appreciative and she was happy we came, but at the end of the day nothing had changed. She knew we loved her, but it didn’t change how she felt. We didn’t fix anything. All we could do was be there by her side.

Our middle one calls — a lot — and she is far away. What we have come to realize is that she is just a verbal processor. She works through her issues by talking to us about them. It stresses me out. A while back I finally said to her, “I don’t know what you want me to do. I can’t fix it. You have to figure this out.” She acted totally confused by my statement and said, “I’m not calling to have you fix it. I am just calling to talk about it. I don’t expect you to do anything except listen to me and maybe just get a little support and sympathy. Just talking to you makes me feel better about whatever is going on.”

This was a lightbulb moment for me. I am here to listen and support. I am no longer the fixer.

So, this week while talking to my oldest I reminded her that I was here for her and she didn’t need to be alone with her thoughts. She could call me and just hash them out. She did — about 10 times in one day! When my middle one called I gave her the opposite advice. I told her that it’s okay to be alone with her own thoughts occasionally. Varying degrees…

We are still working it all out just in time for my oldest to move back home. There are probably parameters that I am unaware of in this area as well, but I am sure they will let me know as needed.

Meanwhile, I will just keep working on the child I have at home. She still needs our advice and our permission for everything. Her latest request as she left the house was a nose ring. Like I said, they may break me yet.