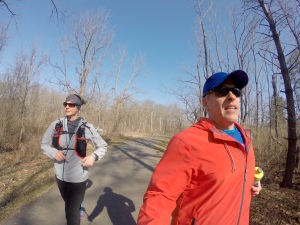 (G): Jason is trying to kill me! No, not the Jason from Friday the 13th fame, or wait, maybe Jason Koop is THAT Jason. I am not sure. This brings up a whole new set of questions for me to ponder.
Originally when I uttered “Jason is trying to kill me” it was in reference to Jason Koop, author of Training Essentials for Ultrarunning. I have been test-driving his approach since the beginning of the year and it’s been, as they say, a game-changer. Question is what game am I playing now? Have I unwittingly signed myself up to be chased in the woods at night by a hockey mask wearing psychopath?

Or have I just signed up to train as hard as I ever have? I think it’s both.

Now, let’s be clear, just because it’s as hard as I, personally, have ever trained doesn’t mean that I am going to wow anyone else with my athletic prowess. Because, I am not. I still breathe heavy, pout, complain and whine through most of these workouts. Most of the complaining and whining is in my head because I don’t have enough air in my lungs or energy to say it out loud but still there’s a lot of whimpering that goes on.

Also while I am training hard, for me, I am sleeping like a champ and while attempting to lose weight I can’t keep my face out of the refrigerator. It’s going well, can’t you tell?

Burpee, what?
Last week I was all shiny and proud of myself for my burpee challenge completion and promised to keep doing them a few days a week. Well that was a big, fat lie. I mean I didn’t know it at the time but it was and it is. I haven’t done a single burpee since last Tuesday and I am having a hard time feeling bad about it. I just don’t want to. And I am, at the moment, OK with that. 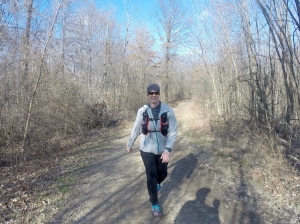 What I am doing is running, running and running some more. This week I totaled 48 miles and it felt like it.
The most crushing combo came over the weekend when I ran 2 hours on Saturday with two 20-minute intervals built in of hard running and then followed up on Sunday with a 3-hour run. It was long and hilly.
Alright, I walked up the hills but it was still hard. And Sunday at the park was apparently take your dog outside day because we saw upwards of 30 dogs and there is a possibility that I loved on nearly ever single one!!

Big pups and little pups. There were lots of tall tails and tongue wagging. Good stuff to distracting me from my tongue hanging out of my mouth.

Yesterday was a rest day and aside from my one mile to keep the streak alive I took full advantage of it.

But today, we’re back to another 6 days straight of pounding. See how I like to make it sound all impressive but the truth is it will look way more like trying to get your kids to eat breakfast, put their shoes on and clean their room. There will be a whole lot of “Aaah, man!! Do I have to???”

And the answer is, yes, because I said so!!! See ya next week!

(L):  Dang girl!  Go get that carrot from Jason Koop or Swaggy J or whoever you are chasing on that trail.  It’s just the beginning of February and she is already running 5 hours on the weekends!  Meanwhile, I am still waking every morning to that low hum in my head that says, “I don’t wanna…”  So everyday I have to ask myself, “do you want to be fat, frumpy and just fine or do you want to be FUN, FIT and FINE?”  Okay, all of this is slightly exaggerated.  I really just moan and groan and then I come back from school drop off and do the deed.  Some days I hate it and I just muddle through and other days I am like Lady Gaga rockin’ it out in my basement!  Seriously, I sing my way through her album as I lift weights and now that I have witnessed her Super Bowl show I am re-energized.

In fact, yesterday as I was doing my squats I imagined myself in a sequined body suit and knee-high boots.  Something didn’t feel quite the same though.  Maybe it was just that I don’t have blonde hair…I don’t  know.  Oh, yeah,  Lady Gaga has a rockin’ body and I don’t.  Did you see that girl’s belly?  I know there are some haters on social media who think otherwise, but seriously I want her belly.  That girl is STRONG and there is no way she could have rocked out that performance if she wasn’t.  I actually saw her being interviewed last week and she was doing abdominal crunches while she was singing.  I don’t mean kind of singing, I mean, full on belting it out.  She wanted to be ready to sing while she was jumping and dancing all over the stage.  I’d say she nailed it. 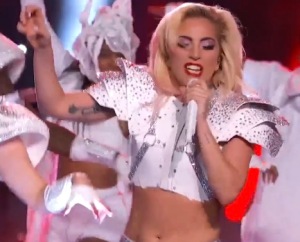 Okay, back to me and my abdominals.  I have been a little disappointed with my progress so far even though I am being very consistent with my workouts. I am still lifting weights 3 times a week and walking/running at least 3 times a week as well.  I fell off the yoga train last week, but plan to get back on it this week because it feels so good.

Because I am working out consistently and not getting the results that I want I started a 10-day detox this week.  I am trying to jumpstart my metabolism as well as kick some bad habits.  So, I am eating super clean and drinking non-dairy smoothies for two of my  meals.  The end of the week could be a little challenging as I will be traveling for a few days, but rather than put it off for another week I decided to go for it.  Yesterday was my first day and it went pretty well.  I was busy so I didn’t spend a lot of time thinking about what I couldn’t eat.  For the next 9 days I plan to focus on Lady Gaga’s belly for daily inspiration.  That should do the trick!