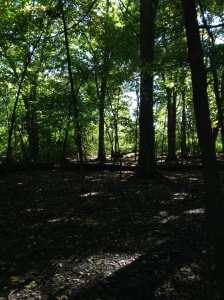 (G): Last week, I told you there wasn’t any time to waste. I needed to get back into training and fast because our next event is coming up quickly.
I jumped back in head first and it didn’t disappoint. It was tough. I didn’t take it easy on myself. There were several tantrums staged by me — maybe only in my head but there were tantrums.

Tuesday started the full-force return with a hard 4-miler and core work. When I woke up Wednesday morning I could feel it. Feeling sore and tired really made the “fast” running I had on my schedule even more special. Speed work, for me, always equals misery but after a layoff like the week before it hurt. Every half-mile interval was brutal and I needed a little pep talk to get through and start each one. I’ve told you I talk out loud to myself before. This week was no different.

By Thursday, the fatigue of the two previous workouts was starting to accumulate but I have a 12-hour race coming up. Fatigue will accumulate there, too. I completed my 8 miles of hills and my hamstrings had accumulated a few swear words along with fatigue by the end.

On Friday I was feeling rather spent. Thankfully, it was a rest day from running and since I had some pretty high mileage planned for Saturday I opted to skip the weight training so I’d be fresh. 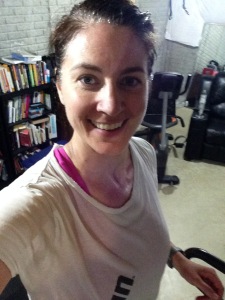 I had 20 miles on the agenda for Saturday and when I woke up I discovered the weather was sticky. Rumor has it Fall is on the way but Saturday was not showing any signs of giving up on summer.
So I cheated. Mentally, I am done with the heat and humidity and it was more than I was willing to tangle with because the mileage was daunting on its own.
I opted to run on the treadmill. At first, I am not sure it was much of a trade off because my husband, who was watching football and not moving, thought the humidity was fine so he turned off the A/C and the house was equally humid as outside.

At mile 13, it was 80 degrees in the house and I finally asked him to turn on the air on. I am not sure it changed much for me at that point because by the time I was done I’d been through two shirts, two pairs of shorts and more than a few attitude adjustments. But I did make it. 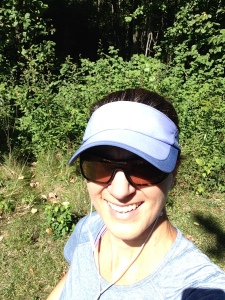 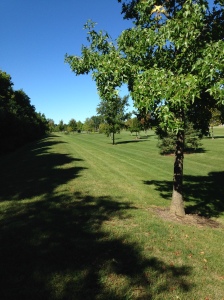 Sunday brought with it tremendous relief. I only had six miles planned and it was a beautifully cool day. It wasn’t all sunshine and light because after 20 miles I was tired before I got started. There is, however, something mentally easier about knowing you’ll be done in six miles instead of 20. The cool air and grass underfoot felt good to my sore muscles, although the couch I was lounging on later felt even better.

After some good sleep, I woke up yesterday feeling refreshed and was able to hit the weights with gusto. We are 18 days away from the MOX 12-Hour. Head first into adventure.

(L):  Each week when I sit down to write the torture report I first wonder what kind of outrageous training G has done over the last week. Let’s face it she rarely disappoints. Second, I try to summarize my week with a word.  This week two words came to mind: Consistent and slow.  In fact, I could even combine them to be consistently slow and that would still make perfect sense.  However, the last couple weeks while I have continued to be consistently slow I have also been consistent in my training, but the training itself has felt slow.
I have 8 solid weeks left to train and I am starting to get nervous.  I am not worried about finishing.  I know I can slug through 30 miles.  I just want to be better prepared.  G is consistently rocking out 30 miles per weekend and I “walked” 13 this weekend.  That is not enough to feel good about my training.
I am sticking to the training method that has always gotten me through and that is shorter distances through the week with longer distances/time on the weekend.  I say time because when I am training at an altitude of 8,500 feet I don’t always care if I am running. If I am walking at a fast pace in the mountains then I know it’s of value when I hit sea level. Let’s face it I am not participating in these ultras to win anything.  I do it for the satisfaction of facing the challenge and enduring.
All that being said, I want to amp up my training and be ready for race day.  I have new running shoes ordered and on the way which will help as I have been having issues with the ones I bought in July.  Even though I have worn these shoes before they have been remodeled and my toes and the toe box are no longer compatible.  Hopefully, my new ones will be a love match.
On Saturday, I awoke and was ready to hit the trail.  What I wasn’t prepared for was 33 degrees!  Seriously, Mother Nature, September 10th seems even a little early by Colorado standards. There was frost on the ground and while I brought a long sleeve shirt to run in, it was not enough. I made a quick 1 mile loop around the lake and went back for a sweatshirt.  I also picked up my hubby and we hit my happy place for an easy 5 miles.

This weekend we also had friends who came to visit for the day and we decided to take a little hike.  Eight miles later we had caught up on everything we had missed over the last few months and I felt great about not sitting idle.
Sunshine & Sarcasm,
Lowi & G