(G): We all need a role model and someone to inspire us. I have many athletes I admire, men and women, but my latest athletic crush is Sally McRae. She’s about to battle Western States 100 this weekend and she’s training like a BOSS! I follow her on Instagram and Facebook and every time I see her latest training run, workout, or fun photo with her family I think, “I wanna be like Sally!!”

That blew the doors of my mind. I didn’t know my mind had doors either until this moment. But it does and they blew off.

I’ve spent a lot of time in my life comparing how I look to others. I am too tall, too big, too… whatever. And this has really stuck with me. I think it’s resonated because I think she looks phenomenal and yet still there are others questioning her appearance. Questioning who she is to show up as she does. Always questioning. Maybe that’s the human condition, the human experience and the trick is to be ourselves regardless.

Even Dr. Seuss knew there was nobody “you-er than you!”

When I say I want to be like Sally it’s less about wanting to “be her” and instead approaching training and my life with the same freedom and seemingly wild abandon. I am inspired by her to be my best and “do exactly what I was created to do.”

It occurred to me the other day that when I run, whether in training or at a race, I don’t attack. In fact, I just hope that the distance doesn’t bite me back and that we can be friends. But when I watch Sally race she attacks the mountain. She attacks the distance. She may not be fearless but she doesn’t let the fear stop her. (That is, of course, my impression of her because much to my chagrin we aren’t friends. I mean, if she knew me I am sure we would be but alas we’ve not yet met.)

This week I pushed hard. I pushed up to my limits. I tried to give my all to everything. When I did hill work, I threw in higher inclines and ran more of the steep climbs than normal. When I was working on speed I went for it even when a couple times I felt a little light-headed (just briefly, mom, don’t worry). And Saturday for my last long training before our 50K next week I thought to myself as I took my first step, “Attack like Sally!”

I did. It was tough and I was pretty well blown up at the end but I didn’t quit.
As we head into the race this weekend I am not as prepared as I’d like to be and it’s going to be hot. The two things that are often my nemesis: self-doubt and high temperatures.

(L)  Finally, G has succumbed to my mindset of “who cares?”  Okay, that isn’t exactly what she was saying, but she is getting there.  I am registered for the Slacker Half-marathon this weekend.  I am not properly trained…again.  I swore to myself that I would never let myself be unprepared for a race again and yet here I am.  I already know it’s going to hurt, but clearly I didn’t care enough to put the time in.  I need to watch some Sally McRae videos or something to get motivated.

I have a plan though.  I decided I could either endure all 13.1 miles on my own or I could enlist some other poor untrained suckers to do it with me.  Misery does love company! I asked my oldest if she would like to do it and told her we could walk and run the whole thing.  No pressure. Once she agreed my youngest said she would do it, but only if Alex did it.  Yes, almost there.  Now I have yet to convince my hubby who if you remember already agreed to do it with me like 6 weeks ago.  Saturday is his birthday and I can think of no better way for us to celebrate than to all do a race together.  I told him he gets free beer at the end, but apparently he doesn’t understand the race fee/free beer thing.  He doesn’t get that you have to PAY for the fun we are going to have between the start line and the free beer.

It’s only Tuesday so I figure I have a pretty good chance of convincing everyone to do this race with me.

And so you don’t think I am actually planning to do this race with no preparation at all I have been out logging some miles.  Some are walking and some are running, but I am not a complete slacker. 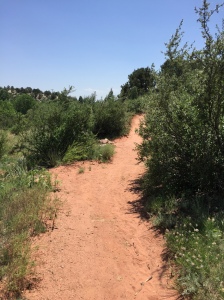 Stay tuned next week to see how G’s attack at the 50k went and if my Slacker mentality was enough to get me through my half marathon!