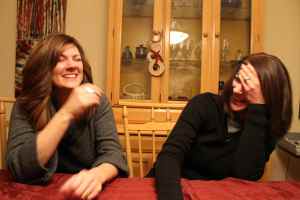 Sunshine or sarcasm, peace or anxiety…it’s all about flipping life on its head. Sometimes finding the lighthearted is easy and sometimes we resist, but it’s out there.

You may have seen the Coca Cola video where a man is on a train watching something on his iPad and he is laughing hysterically. He is oblivious to everyone around him, but they can’t stop themselves from laughing either. I have watched this video many times and it never ceases to make me laugh.

It got me thinking about the things that make me actually laugh out loud. I immediately thought about a message G sent me months ago. I had just gotten off of a plane and was riding the train to baggage claim when I opened it. It was a series of text messages that sisters who live in different states had sent each other. I can’t remember all of them, but they were actual screenshots of text messages. One of my favorites was when sister #1 texts sister #2 and says she hears something in the other room (remember they live in different states). Sister #2 says it’s probably the wind. Sister #1 says well make sure you tell mom I love her and that my obituary states that it obviously wasn’t the wind! It makes me laugh just typing it! I am not sure why that one stuck out for me other than it’s something we have all done. We try to reassure someone that everything is going to be fine, but in this situation sister #1 turned her potential death by intruder into a dark comedy sketch we can all relate to. Plus there is the added bonus of somehow making it the other sister’s fault and having to tell mom about it. It doesn’t get any better than that!

As I read these text exchanges on the train, I found myself laughing out loud. I became a little self conscious as there were others on the train. My mind was like, “hey, who is the crazy lady laughing and crying while looking at her phone? Umm, security?”

Why couldn’t I be the guy on the train? He was happy and the end result was that everyone around him was smiling and laughing.

Next time I vow to be the guy on the train. I don’t care who is around, I am going to laugh and spread the cheer.