Today I will tell you a tale of a girl with no bra. Not just any young, teenage girl who could go braless unnoticed. No, ladies and gentlemen I’m talking about a grown-ass woman who is 49 years young who forgot to pack a real bra for her Easter weekend in the mountains.

How, you ask, could this debacle even happen? Well, the story begins with a 6:30 am wake up call by the pups. It may read Good Friday on the calendar, but their bellies want to be fed at the normal time. They don’t care about sleeping in.

Let’s be clear, I was awake, I was just being lazy.

Anyway I decided to get up and do the morning routine because I knew we had a short morning to pack for the mountains. I wanted to walk the dogs, workout, I had a hair appointment and then we wanted to get on the road.

After taking care of the dogs I decided to unload the dishwasher real quick before changing into my workout clothes.

Mistake number one.
You see I proceeded to shatter a glass that sent tiny shards EVERYWHERE! (Note:this was my second glass this week that I dropped. Perhaps dishes should be taken off my to-do list).
I rescued the dogs first and went for the vacuum. The vacuum would not turn on. Do you see how quickly this day was turning south?
This small little mishap now had Andy on the floor with all the tools…insert big sigh here because nobody wants to start their day on the floor with glass, a broken vacuum and puppies who just want to see what all the excitement is about. Praise Jesus the hubby fixed the vacuum so I could clean up the glass.
After successfully cleaning up the 2 million pieces of glass we needed a drink, I mean, a walk!
We wrangled the dogs and went for a long walk.
Things were looking up. We had been walking for about an hour and we were approximately a half  mile from home when we saw the FedEx man coming down the road. I suddenly remembered seeing an email that our wine was to be delivered.  I immediately began calculating if I could beat the FedEx truck to our house. Andy felt like he had a better chance of flagging him down and signing for it. I, on the other hand, felt up for the challenge! So I ran.
Just for the record, I made it just in time for the delivery which was good because I was thirsty and the weekend was not on solid ground yet!
Okay, so you guys have an idea of how the day was going. I ran upstairs for a shower and decided to take a quick look at my phone. I then realized my hair appointment was in 30 minutes rather than an hour. No time for a shower. I was slightly terrified of getting behind the wheel of a car at this point, but also invigorated after racing the FedEx truck so I pressed on.

All went well at my hair appointment and I made it back home safely. I felt like things were actually turning around.

Once home I quickly began packing all the food and clothes and dog stuff. I am a professional packer at this point. I have done this a million times! We had the added fun of it being Easter weekend so we needed nice clothes for church, Easter basket and ham and all the trimmings. There clearly was no time for a shower.
Mistake number two!
We piled all the things in the car and drove to the pet store because we clearly had not done enough and who doesn’t run to the pet store on the way to the mountains?
Somewhere WAY past the pet store and just before taking our exit it hit me.
I DIDN’T PACK A BRA!
Yes, I was wearing a very old and terrible sports bra, so technically I had a bra. It’s one of those bottom of the barrel, no other clothes are clean kind of bras. If I had just taken the time for a shower I would be wearing a REAL bra. The irony is that I had just spent an ever-loving fortune on new bras earlier in the week, but they were all back at home.  All I could think about was how nice this sports bra was going to look with my v-neck blouse on Easter Sunday!
Obviously, this is a first world problem and as I said earlier, I am a grown-ass woman so I had a couple of choices.  I could run to Wal-Mart and pick up a bra or make do with what I had.  Seeing as though Wal-Mart was 30 minute away I decided to just wear the sports bra for 3 days.
Here I am on day 2 after skiing.  Although not the sports bra of choice, it was a  perfect option for the day.

While skiing I did stumble upon these lovely bras that were clearly left for emergency purposes in the trees alongside the ski lift, but my ski pole wasn’t quite long enough to reach them.

And this is Easter Sunday. 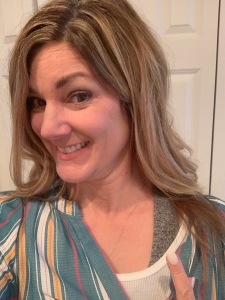 I did find a long-sleeved white shirt to wear under my blouse so in the end it really wasn’t a big deal at all.

After reflecting on this little mishap I now realize that a 49-year-old woman could probably go without any kind of bra for any number of days and go unnoticed, especially in the mountains.  It definitely begs the  question, “what other essentials are not that essential?”

If you need me I will just be out shopping for a muumuu.