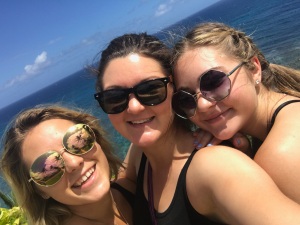 You can’t give someone their self-worth.  You can’t order it online, go to the store and pick it up or gift wrap it in a nice, neat package and hand it to someone.  Everyone has a certain level of value they place on themselves and it can vary depending on their personality and any number of experiences.  Some people seem to just be born with a sense of fearlessness, worthiness in all situations and an overall feeling of being ENOUGH, while others struggle to get there. We have all known people, or maybe we’ve experienced it ourselves, who seem to have it all together but they never quite go for what seems completely achievable to the outside world.  They just fall short of getting to the goal and you can see that it would only take one more step. Or perhaps their choice of friends/boyfriends/girlfriends leaves you questioning if they know their own value. There are other people who no matter how much success they seem to achieve in their lifetime, never quite feel it to their core.  They always seem to want more.
We use all kinds of euphemisms to describe self-worth, but all of these examples stem from our inability to recognize our own worth.  We hustle for it, we stall, we make excuses, we get angry, we cry, we settle, we never stop and still some of us are paralyzed by our fear of not being enough.

Recently, G sent me a YouTube video of a woman named Marisa Peer who speaks about what she describes as the “Biggest Disease Affecting Humanity: I’m Not Enough.” It’s definitely worth 42 minutes of your time.  Now, I know some of you are going to watch it, roll your eyes and think it’s a bunch of %$**. That’s fine.  You can move on with your day and forget we were having this discussion. For some of you it may strike a chord.  As with anything, I think sometimes we receive messages at just the right time.  G sent it to my girls at the same time and told them they were enough.  I would venture to guess, if they responded, it was with a cursory, “thanks.”  My oldest said it was interesting and moved on with her life. My middle one couldn’t be bothered to watch it…for at least a month.  I kept asking her if she had watched it, encouraged her and then gave up because Sydney works at her own pace and in her own world.

A few weeks ago, this same middle child called frustrated with several things in her life that felt out of her control.  This conversation seemed to stem from her comparing herself to friends on social media and in the music industry, but deep down I knew her self-worth had taken a hit.  She was insecure with who she was. I listened, offered some options, but told her she we’d work on it. I was heading there to visit so I figured I could run triage once I arrived.  Honestly, I ended up not seeing her that much while I was there.  She was busy, she was in a good place and then one day she briefly mentioned that she started watching that video about being enough.  I refrained from commenting other than to say, “oh, yeah it was pretty interesting.”  She brought it up a couple more times while I was there, but it didn’t lead to any serious discussions.  I knew it was percolating.

A couple of days after I returned from Nashville I received a phone call from her.  She could barely get all the words out fast enough because she had finished watching the video, had thought about it, discussed the content with her sister and boyfriend and then written all over her mirrors (you’ll have to watch the video to find out what I am talking about).

After weeks of NOT watching this video she had watched it in its entirety at just the moment she needed to hear it.  She was all in.  She related to what was being said and this woman spoke to her in a way that books, messages, friends and family had not been able to in the past.  It came in a moment of deep insecurity.  It came when she was sitting at what she calls a low point and she needed to believe she was truly enough…RIGHT NOW  not when she is 100% financially responsible, not when she gets a publishing deal, not when she learns to be on time, not when she is a size 2, not when she “makes it” and not when she “has it all together.”  She suddenly realized she was enough where she is RIGHT NOW.  This realization didn’t make her sit down and watch Netflix, it motivated her to be the best version of herself that she can be.  Since writing on her mirrors she hasn’t missed the gym, she has been eating healthy, she has had amazing music opportunities come knocking on her door, her sales have been better than ever at work, and her relationships have hit a new level of love and understanding.  She feels the change and has even forwarded the video to friends.
We live in a world where self-worth is hard to come by.  We can feel great about ourselves and then we take a gander at our friends over on social media and it can send us into a tailspin.  Our young people are growing up in a society where they don’t just compare themselves to a magazine cover or their friends in the hall.  They are bombarded with photos of their friends every second.  It used to be that we heard about a party that we weren’t invited to on Monday at school.  Today, our kids see their friends in real-time having fun without them.  Social media has become their reality whether it’s true or not.  It can be soul-sucking and our self-worth is at stake.
We aren’t going to find our self-worth anywhere, but inside ourselves.  We have to make a shift, stop comparing and believe we are ENOUGH.  I encourage you to watch the video this weekend. Reflect on it without judgement.  What do you have to lose, but your self-worth?
Sunshine & Sarcasm,
Lowi & G