Earlier this week a friend asked what is was like having my husband home on the weekend since he changed jobs.
It made me laugh because it’s definitely been different. For 16 plus years my husband and I have both worked non-traditional hours. First it was when we both worked at a newspaper and we routinely worked weekends and he always worked into the early morning on weekdays. Not long after we got married, we both left the newspaper business and he started working in sales and I began life as a personal trainer. Again, neither of these was a 9-5 weekday existence.

But it’s what we were used to and it wasn’t that big of a deal. Slowly over time my business grew enough that I could stop working on the weekend but John’s late night and weekend hours continued.

So now, he’s working 8-4 Monday through Friday and for the most part is home every weekend. It’s weird to have him around so much. I was quite used to being alone when I was home a fair amount of time. I had my own routine and when I was up and out of the house early, he had his own, I am sure.

The first few weeks it was a novelty and now it’s getting to be our new normal and as with any change there are adjustments.

But as I thought more about it, one of the things I am most grateful for about having a running buddy is that I now run with a little less tension. Running alone, while I was quite particular about where I ran, is something that women can’t do without thought. I was always sure to let my husband know when I was heading to the park and to check in when I was done. He always had a good idea of when I should be done and he’d text me periodically to see how it was going. Not a full-proof system but it was something.

I also only ever ran alone at a park that either wasn’t densely wooded or made sure I ran early when all the other runners are there so you have some safety in large numbers. I am an expert on what metro parks have noticeable ranger presence and those that do not.

I am a woman so I am always paying attention to who is around me whether I am alone or not. I think it’s encoded in our DNA. But it’s nice to feel like I can go to any park (within reason), any time of day because I am not alone. Certainly, having a running partner doesn’t mean that you are entirely safe but it feels better. 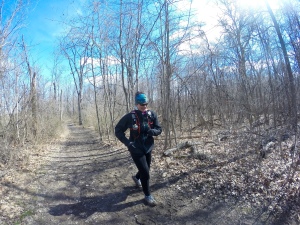 My gratitude feels conflicted because this seemingly newfound freedom also makes me feel despair and rage.

Why do I have to be concerned about going to the park alone?

Why can’t I go out for a run without any thought to my safety?

Why am I always listening for footsteps behind me?

And yet the reality is every single day women are victimized whether on the running path or simply going about their day. But then I am reminded of a woman in Seattle, recently, who was attacked in a park bathroom. She put to use all the self-defense skills she’d just learned at work and before the fight was over she left her would-be rapist locked in the bathroom thanks to the help of a passerby and waited for the police to arrive.

Sadly, though, the good person doesn’t always win through no fault of their own. So with that I will take my awkward gratitude and run on. And all the while I keep an eye out for the solo runners, male or female, when I see shady characters at the park. I find a ranger when someone acts suspicious and I have on more than one occasion asked a fellow female runner to stick with me if one or both of us are uncomfortable by another’s presence.

We are our brother’s and sister’s keeper and that doesn’t change because I have a new running buddy.