I was reflecting early in the week, after one of my endorphin highs, on why I would ever procrastinate working out. It felt so good to be in the gym sweating.  By the time Thursday hit I remembered.  I had started with my upper body so not being able to pick up a pen for a few days was okay.  I like to eat, but even I had to question how necessary it was when I thought about the arm motion that was involved.

Then I did my leg work out.  I knew what was coming because I had been here before many times.  I am not just talking sore muscles.  I am talking about needing one of those chair lifts to get up the stairs.  Actually, no, that would not have worked either because I would have had to bend my legs to sit.  I decided that I really didn’t need to shower nor was there anything of importance upstairs.

Problem solved or was it?

Well…we’re friends, right?  Okay, the real problem was that I am drinking enough water to fill a kiddie pool, which means I  need to pee about ten thousand times per day.  Couple that with my nearly being incapable of sitting (way too many lunges) and it makes for an interesting day to say the least.  Thankfully, my arms are feeling a little better as now I have to brace my entire body against the walls and S L O W L Y  lower myself down to the toilet.  I do the same in reverse motion and then repeat about every 15 minutes.  It’s a glamorous story and I realize this is WAY too much information but this is the torture report and I feel as though I have been tortured.

You might be wondering about accountability since my track record last year was less than stellar.  No worries, my girls have taken it upon themselves to motivate/cajole me and their father into working out.  They are sending photos and throwing down the gauntlet to challenge us nightly just in case we lose our mojo overnight.

So, what exactly have we been doing?  Weights, walking, running, there is an inversion table in my basement which has already proven to be challenging (see photos) and yoga because it’s good for us and, quite frankly, my body hurts a lot.

Sunday is my day of rest.  This past Sunday I took full advantage of that and I slept in, walked and ate bread.  Lots of it.  I’ll try to be better next week, you know, when I can walk again.

It’s good to be back!

(G): Last Wednesday after nearly a week off running, I got back to the cardio. Nothing like starting again twice in nearly as many weeks.
I started running after a break just before Christmas only to catch a nasty cold days later that pummeled me. That put me on the sidelines for another 5 days until I finally walked 2 miles last Wednesday. And I do mean walked. I took it slow and easy and after about 30 minutes I was exhausted. The next day, I decided to do some hill training but at a much lower intensity. It went better but after 3.5 miles, I called it a day.
It seemed like a cruel turn events after I had just suffered through getting restarted only to have to endure it again.

On Saturday, it became clear it was time to rip the Band-Aid off and get back to it already. Even though I was still a little stuffy and coughy I was much better and I committed to an 8-mile run.

It started out surprisingly well but by 5.5 miles it was packing a wallop and I was beat by the time I got to 8. Sunday, I opted for 6 miles and every last one was a slog. I never got momentum. I felt tired the whole time. And I was sweating like I was in a sauna.

All of this is a sign that training for 2017 is officially on and it’s going to possibly break me before it makes me.

It’s on
It’s time to get down to it. I have big plans for the year, as I mentioned yesterday. I have seven ultras on the calendar, starting with two 24-hour races in April, wrapping up with a 50-miler in November and lots of other challenges in between.

I am rolling the dice on a new approach to my training early this year. I am focusing on improving my VO2 max first to essentially build a bigger, faster, higher capacity engine. The next three weeks will encompass middle distance runs with high intensity intervals mixed in. Remember when I mentioned it might break me first? Today is my first foray into this special kind of “fun” so the only thing I am guaranteed is a colorful Torture Report for next week. 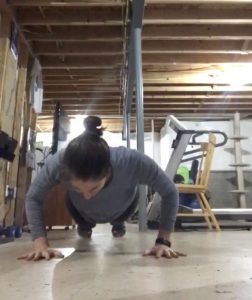 Burpees
After suffering through 31 days of burpees, which I loathe, what better thing to do than to start it all again. But yes, that’s what I am doing. I am so bad at them and I actually started showing signs of improvement that I opted to do the burpee challenge over again in January. For those of you who are new to the party, this particular challenge prescribes doing the same number of burpees as the date of the month. Today, 10 burpees are on the schedule. This one I can blame on Swaggy J. He suggested starting over and doing it all again and I apparently am not intelligent enough to say no.

Running/walking streak
Not being able to say no or being easily influenced is also how I got to my other adventure for the year. I am actually going to have to be a little creative with the calendar year on this one. Over the years, I’ve heard and read about runners who have been keeping running streaks alive for decades. They commit to running at least one mile every single day.

There is a runner, known as the Raven, who has run 8 miles every day on Miami Beach for 40 years.

Harvey Lewis, a renowned ultra runner, has a running streak going that has extended for 730-plus days and he’s averaged a half marathon a day.

I am going to take a much more conservative approach in that I am committing to a mile every day. Some days that may be walking a mile, others running a mile, and some days running 20. But at the very least one mile every single day.

Here’s where the math is going to get a little wonky. Before the new year I decided this was a goal of mine. I wasn’t, however, planning on getting a nasty cold and I was already into 2017 when my cold-medicine fog lifted and I remembered my goal. I missed doing miles on the first three days of January. So, I am going to go from Jan. 4, 2017-Jan. 3, 2018. I didn’t want to have to wait 362 days to give this a try again. You understand, right?

Here’s to starting again and not stopping for a while!