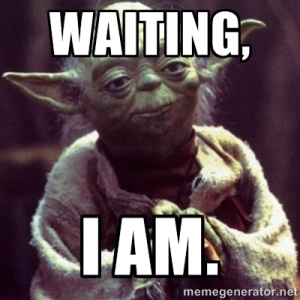 Wednesday morning I rushed home before 11 am so I could be there in time for my internet service window of 11 am – 2 p.m.
I got there just a shade before 11 and did some work around the house hoping that soon the repairman would arrive so I could be back on the internet and be able to get some work done. 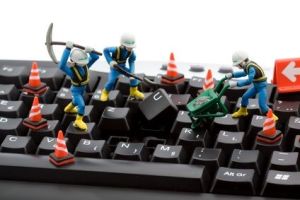 I did some laundry, finished reading a book, cleaned the litter box, lots of really important things. And still no repairman. Around 1 p.m. I texted my husband, who had made the appointment, to be sure that I had the right day. I did.
So I waited, waited and waited some more. I was stuck. I couldn’t work because the internet was down. I couldn’t leave or I’d miss the repairman. I couldn’t workout because I can’t hear the doorbell in the basement. I was simply left to wait.
Then my window came and went. It was 2:30 p.m., 3 p.m. and I was assured that someone was “on the way.” Then at the magical hour of 4 p.m., exactly 2 hours after they were supposed to potentially arrive, the repairman shows up.

No apologies or commentary on being late just shows up all “hey man, how’s it going?” I was annoyed but the only thing worse than waiting for 5 hours is waiting that long and also not getting your internet fixed so I went along with the program. An hour went by. Tick tock and I am still waiting. Now I am waiting for him to install the new modem already and leave. He goes outside to “the box,” then to the basement and back to the office. He does this again and again and again.I don’t even know where this “box” at my complex is but it’s apparently the oracle, the almighty deity of all things internet. I assume this because I’ve been in my office and my basement and there’s nothing but dust bunnies and old yearbooks in those places.

Finally just before 7, he’s done! He asks me to fill out a survey. Seriously? Are you kidding me?

But I, dutifully, fill out the survey for fear that if I don’t he’ll take that new shiny, working modem with him.

OK survey submitted. I thought to myself, now will you please leave?! I have waited all day for you to arrive and now I am waiting for you to leave so I can accomplish one small item on my to-do list because it’s now 7 p.m. and I haven’t accomplished a darn thing since 10:30 a.m.!!!

He spends a few minutes regaling me with cable/internet man talk about how poorly the other cables were installed and how bad the “splitters” in the basement were. In fact, he shows me one and explains it all to me as if he is somehow under the impression that I have installed these little metal connectors. For the record, I did not.

After my not-so-subtle lecture on proper cable and internet installation he exits. Angels sing and I rejoice!

But, unfortunately, along with him also left my motivation and mojo. I was so far past my own window of caring about accomplishing anything that I pretty much gave up. I jumped on the trampoline for a bit to jostle the angry girl out of me and then had dinner.

I did rally a bit later on and got a few things checked off my list but then I headed off to bed. I got up early yesterday with a full day on my calendar and new hope. I arrived at the gym for my first appointment at 7:30 am. I waited, waited and waited some more.

It’s happening again, I thought. I got a text from my client saying she was stuck in traffic and 30 minutes later she canceled. Wednesday had eaten Thursday I was pretty sure and I was back to the waiting game. I drove home and gave myself a pep talk on the way. I was not going to let this day end up like Wednesday. I ran in the house and got my butt straight onto the treadmill. I had time for a workout before my next appointment.

After an hour I felt better and was confident I had shaken the “waiting bug.”

Why is it that we hate waiting on some things and not on others?

I don’t like waiting for repair people at my house.
I don’t enjoy spending time in a waiting room even though that’s apparently what it’s for.
I really never liked waiting for Christmas.
I prefer not to wait in a long line.

But then there is other waiting that I tolerate and maybe you do too.
I am OK waiting to clean out the garage.
I am perfectly content to put off making that doctor’s appointment.
I will wait and wait and wait before I make a move outside of my warm, cozy comfort zone.

Why is that waiting so much different?
Why I am good with letting my biggest dreams collect dust because I am “waiting?”

What I am waiting for has remained unclear so far but I am hoping that at some point this seemingly pointless, senseless waiting will end or it will reveal itself. My guess is that this kind of stagnation is less waiting and a whole lot more fear in someone else’s dress.

When I say things like, “not right now,” or “let’s wait and see” it feels like action when it’s really being fearfully stuck.
A couple days ago a friend called and asked me to participate in a series she’s doing live on Facebook until Christmas. My first reaction was fear and to say no. So I said, yes. I am still fearful and nervous but I am also too damn tired of waiting.