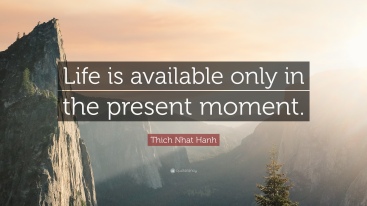 “Life is only available in the present moment.  If you abandon the present moment you cannot live the moments of your daily life deeply.”  Thich Nhat Hanh
It’s been a busy week with team dinners, volleyball games and one of my dogs has had stomach issues 24 hours/day.  Need I say more?
On Wednesday, I had a packed schedule and there was no room for error. This is when I usually make the most mistakes; when I am trying to fit too many things into a small amount of time  And so what did I decided to do?  Make a quick trip to the grocery store before heading to get Reese from school, of course.
Big Mistake.
Two minutes into my shopping my hubby called asking for a number and he wanted it ASAP.  I started to get frazzled because I was realizing that I would need to run by the house to get the number and also to take the ice cream and other frozen items home prior to picking up Reese. As I walked back to my car with groceries in tow my hubby called again to see if I had the number yet. He is a patient one that hubby! All I could think about was that I was going to be late picking up Reese and therefore late to our next appointment, which was for her dress fitting.
Deep breath.
I drove home and quickly unloaded the back of the car.  I ran in the house and began sorting through the bags for the frozen items.  They weren’t there!  I ran back to the car. They weren’t there either.  I literally stood in my garage and said to myself, “okay, pull it together.  It’s just ice cream.”
Nope!  No ice cream and no chicken.
I switched gears to find the number for Andy while suddenly being hit by a horrible smell coming from the dining room.  Yep, the dog had another accident.  I texted Andy the number, found the Resolve and yelled at the dog who was now hiding under a chair.
Now I was officially going to be late, I couldn’t get the smell of dog poo out of my nose and I still didn’t have any ice cream!
I picked up Reese, drove to her dress fitting and prayed I would not run out of gas as at some point as I was now below empty.  Thankfully, we made it and were only a couple minutes behind schedule. Not soon enough though as someone came early and had multiple outfits to be altered. So we waited.
Then I was stressed because we had one hour before we had to be back at volleyball practice, I still didn’t have gas and then there was that little issue about not having all of the groceries that I PAID FOR!
We did manage to get gas before we ended up on the side of the road, Reese arrived at volleyball on time and I returned to the grocery to get my frozen items.
I drove home, got my groceries out and then…wait, something caught my eye in the back seat.  Yep, a bag full of melted ice cream.  You might be wondering how I missed this lone bag in the back of the car.  Well, while I as on the phone I wasn’t paying any attention to that which was before me and obviously put this one bag in a different place in the car.  I have no memory of doing this, of course.
Word to the wise.  Target bags are the bomb.  They can hold an entire half gallon of MELTED ice cream.  And what is the life lesson in this crazy day?  I need to be present in the moment instead of being 5 minutes ahead of where I am and continuously worrying about the next thing that I need to do.
Sunshine & Sarcasm,
Lowi & G