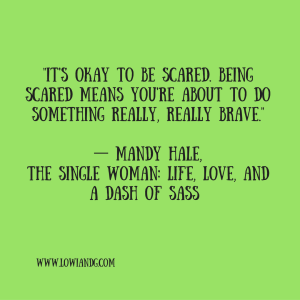 Have you ever listened to someone talk about their dreams and you just know that on some level they are going to make it?  You don’t know how or if this particular dream is “the one” but you know they are going to be successful. Like most parents, we feel that way about each of our girls when they talk about their future. We already know Alex is going to be amazing in the medical field. She is smart, compassionate, empathetic, driven and completely focused. That doesn’t mean that doubt doesn’t rear its ugly head from time to time.  With Alex, it usually manifests in a tear-filled phone call in which we listen, consider what is being said, and then take the necessary steps to build her back up.  We help her find the courage and confidence to continue and then she is off and running again.
Our middle one, Sydney, takes a less direct route when voicing her fears and sometimes it takes us a few days to realize what is happening. This week was no exception. She called at midnight to discuss her financial situation and to inform us that “making it” in the music business could take years.  While this was not news to us it apparently was becoming a shock to her bank account.  She was feeling overwhelmed with the idea of how she would ever become financially independent while taking this path.  While on the phone she began to create a plan b.  For Sydney, plan b has always been taboo.  She refused to think about an alternative plan because in her words, “if you have a plan b then you might as well skip plan a and go straight to plan b.”  While she wasn’t talking about giving up on her dream she was trying to figure out how she could do this indefinitely.  We convinced her to table the discussion until we could talk during waking hours.
This weekend, we were able to speak face to face via Skype. Once again, she spoke of this alternative plan. As we listened it became abundantly clear to us that fear was speaking. She had spent the last year developing her skills and now she had reached a pivotal point in her journey.  She didn’t know which step to take next and fear had begun to creep in.
Fear is a funny little trickster.  It can make you take a 180-degree departure from your current path if you aren’t paying close attention.  In Sydney’s case, we entertained her alternate ideas and asked her what it would be like to not worry about a plan b for at least another year.  She let out an audible sigh of relief but still seemed concerned.  When we asked her what her next step could be she said, “I don’t know.  I’m scared and I don’t know what I need to do next.”
Breakthrough!
As soon as she voiced her fears, the steps began to present themselves. She started talking about all of the things she had been doing that day and what she felt should be the next step in her development.  She had already made important phone calls to set some things in motion.  You could feel her breathing life back into her dreams as we spoke.  By the end of our conversation she had created a vision for the next 6-12 months that while scary on some level, is completely doable.
This reminds me of the famous story of the gold miner R.U. Darby.  Like many men back in the Gold Rush days, he believed he could strike gold. After weeks digging with a pick axe and shovel in Colorado he discovered a vein of gold.  Knowing that he needed more money for the proper equipment he returned to Maryland to raise the necessary funds.
Upon returning to Colorado he and his uncle spent months mining and were touted as having the richest mine in Colorado.  Suddenly, they hit a wall and could not find anymore gold.  Week after week they continued to dig to no avail.  They were losing all of their fortune and decided it would be best to cut their losses.  They sold their equipment and the mine to a “junk” man.  This “junk” man still believed there were riches to be had in this mine and called in an expert to evaluate it.  They struck gold just 3 feet from where Darby quit! What if Darby hadn’t quit?  What if he had just just dug for one more day?
Sometimes we need to brainstorm other avenues and sometimes we just need permission to dig in and plow straight ahead.
Sunshine & Sarcasm,
Lowi & G