The Boss. Bruce. The E Street Band.
Tuesday night I experienced Bruce Springsteen live in concert. It’s something that I have heard spoken about in reverence for nearly 2 decades.
My husband and some of his childhood/college buddies are dedicated disciples of The Boss. And apparently if you are serious enough about Bruce by extension you also love Southside Johnny and the Asbury Jukes. If you have no idea of which I speak don’t worry, I didn’t years ago either. And I am still, by far, on the periphery of this enchantment.

Mr. Springsteen and the famed E Street Band know how to put on a show. Three plus hours, no warm-up band and no break is something you just don’t see in the land of live music anymore. 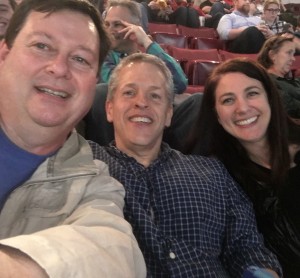 But what may have been more enjoyable for me is watching John and his friend since grade school be transformed into 18-year-old boys in front of my eyes. They entered the concert talking about kids, baseball and current events but once Bruce and the gang hit the first note of “Sherry Darling” they were singing along at the top of their lungs and any cares, concerns or stressors they had on the way in were long forgotten.

As the show continued on into the night these two were elated at hearing one favorite after the other. With each song seemingly re-building the soundtrack of their youth, I felt like I got glimpses of who they were when they were younger, when they hadn’t lived much life yet. I saw the freer side of them before those qualities were scuffed and dimmed by age.

Nearing close to midnight, the show did regretfully wind down long after the “beat-the-traffic” concert-goers made their premature exit.

We cattle-herded our way out of the venue and into the brisk night air. As we waited for the shuttle, my two teenaged companions were content with having seen Bruce “just one more time.”

For me, more than a decade younger than this dynamic duo I thought, “Smells Like Teen Spirit.”