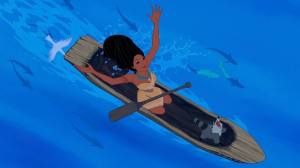 Okay, so it was a carpet ride in Aladdin and not Pocahontas braving a new world that spawned that catchy Disney tune, but still isn’t that what a new year is like? A Whole New World of possibilities? It’s like a newly graded, dirt trail with no potholes. Okay, a girl can dream!

Anyway, that is how I feel about embarking on a New Year regarding my physical well-being. I can put my shortcomings and failures of the previous year behind me and begin fresh. Let’s face it, last year was not my best year in terms of completing the goals I had set forth in the torture chamber. As I told you last week though, I am easing into this New Year and being intentional about what I really want to do. I am not going to let anyone coerce me into my goals. Okay, a little coercion could be necessary, but you get the idea and G is on standby in case I need her to help me commit.

Toward the end of last year I could feel Pocahontas wanting to rise again. I was motivated and excited, but a little wary as she had tried to make an appearance several times last year. I wasn’t sure I could fully get that genie out of the bottle again. For those of you who have had your mojo and then lost it, you know what I mean. If I was really going to unleash my inner Pocahontas, I needed to commit. So, I continued to walk everyday and reflect on what it would take to throw myself back into the torture chamber with G.

And? I think I am ready. I don’t have a definitive plan that I am going to lay out for you, but I am all in! I have even motivated one of my many Pocahontas followers to join the fun this year.

So, here we go, slowly and intentionally into the Torture Chamber of Lowi & G.