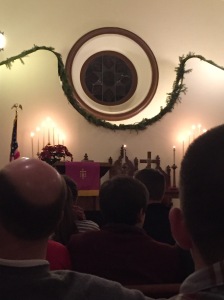 So, it’s Christmas Eve and we are sitting in the dimly lit mountain church waiting for the candlelight service to begin. My middle daughter leans over and says, “don’t look now, but you know the guy that owns the ________ store? His wife just came in with another man and is sitting right behind us!”

I quietly responded “she has a twin sister…”

Three days later we are in the ______store talking to the aforementioned man. My hubby says, “funny story…you know how your wife has a twin?”

“You mean my ex-wife? What about her?”

“Somehow this story doesn’t seem like it’s going to be funny anymore.”

So, my hubby proceeds with the story only to find out that it was actually his ex-wife and her new boyfriend who were sitting behind us in church. As my youngest would say: Awkward!

This next encounter falls under the category don’t say it unless you mean it!

Much to my dismay my two older daughters have tattoos. And yes, I mean they each have more than one. It actually kind of blows my mind when I think about it. Well, it blows my mind that my oldest has a tattoo because she is so conservative and, in my opinion, the least likely candidate for body art of any kind, let alone permanent! But alas, she has a small cross on her foot (who can be angry with that) and then she shows up this summer with a much larger tattoo of the mountains on her ribcage! What? Who are you? What were you thinking? NO MORE! I AM NOT KIDDING!

My middle one? Well, there is not much I would put past her. She is a leap before you look kind of girl. However, she was led astray by none other than G! Yes, G as in Lowi & G! She took my baby girl by the hand and led her straight into a tattoo parlor and paid for her to get a tattoo as a graduation gift! I know what you are thinking and I did consider breaking ties with G, but she is the more talented writer so I decided it was in my best interest to keep her around!

Anyway, you know what they say about tattoos, right? Once you have one, you just want more. Well, between my oldest, who obviously paved the way for such debauchery, and G, my middle one decided over Christmas that she MUST have another tattoo. So, I did what any good mother would do. I laid down the law. I told both of my girls that if I can see a tattoo I would not pay for any future weddings! Ha! So there!

My middle one looks me straight in the face and says, “okay, then I will elope!”

Yep, don’t say it unless you mean it, mom!