Live Reading, you ask? Yep, we are the consummate book geeks. In fact, a week ago Lowi texted me (shocking, right?) that she had finished Brené Brown’s latest book, Rising Strong (another big shock). Anyway, I momentarily had the thought, should I buy the book or get it from the library? In fact, midway through typing that text to her, I thought what am I saying? Of course I will buy it… it’s Brené. I won’t be happy till the binding is warped, I’ve spilled a drink on it, and it’s so highlighted and post-it noted that it looks like my own personal play book!
Then Amazon intervened, as it often does, with helpful suggestions.
Elizabeth Gilbert, another of our faves, also has a new book out Big Magic. Amazon so kindly suggested I buy both. So as not to let the universe and Amazon down, I did!

Holy craziness!! Next thing you know I am sending screen shots of the book to Lowi via text. She’s so taken that she buys it on Kindle so she can join in the delightful, destined messages I am receiving. There are far too many coincidences, fate-isms, synchronistic, OMG moments to fully share here.

Suffice it to say that you must get and read both books. You don’t have to buy them if you are a restrained reader who doesn’t need to mark your territory with a highlighter and a post-it note.

While we are on the topic, imagine us in our respective homes, cross-country, feverishly reading every line, every word, sucking in every nuance and witticism and then recklessly grabbing for our iPhones to say super important and eloquent things like the transcript below. Please note the following was edited for brevity, clarity and utter randomness.

Sadly, without editing, we are more scattered, less coherent, and communicate in incomplete thoughts… so this is an improvement:

Lowi:
Sweeeet!! I’ve been pondering getting big magic..
Angela Miller Barton:
It came up together so I thought, why not
Lowi:
Why not!!
G:
On page 11 of Big Magic, Revolution rears its head. Oh the universe, synchronicity, whatever, We are listening
Lowi:
Wow!!

Lowi: I’m reading it right now! I bought it on my kindle after you discussed revolution! It’s so spot on. I’m reading about fear coming on every trip with her. Not allowed to touch the map, suggest a detour, touch the radio and definitely can’t drive! 🙂

G:😄
And now goats. Really (A couple of weeks ago one of our awesome blog followers misread a few words on the blog. To get in on the joke check it out here… 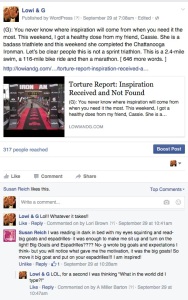 Lowi: No!!!! Stop it!! I stopped reading bc I actually got sick!😳 not sure if I have a bug…
G: Oh yuck.
Lowi: Definitely yuck. So what’s with the goats? Send me a photo!

G: You’re throwing up?
Lowi: Yes
Not currently
G: Man that sucks. And glad not currently. Texting and cookie tossing seems like a tough multi task
Lowi: Yeah not due for a new phone, so…
G: At least you’re still funny.
Lowi: I can’t help it.
G: This book is like a million pages of serendipity, synchronicity and shut the front door!!

G: Feel better. I’m going to bed to dream about goats and stuff
Lowi: of course. baaaahhhh or whatever goats say.
G: 😘