Blogger’s Note: Around Wednesday last week I was sure that I had left my “words putting into sentences” skill on the trail permanently. I couldn’t get the scribe inside to get her letters together. But, finally, I think she’s taken a Quaalude or something and we’re ready to roll. I will forewarn that this blog is a lot like running 50 miles: Disjointed, too long and too short, confusing and a little disorienting.

Let’s just say it outright so somebody is: Fifty miles is far! I mean really far.

In fact, from mile 42 to 50 felt a lot like what an eternity might be like. It was sheer mental fortitude, a desire to finish, Johnny Armani, and all that damn PBJ that got us through the last 8 miles or so.

But miles 1-42 were mostly awesome. The fact that I can even say this is absurd, I know.

The day started off with nervousness, optimism and a dash of “holy crap, what have I done?”

But, quickly, Lowi and I settled into a nice rhythm and we were on our pace target. We couldn’t have asked for more perfect weather, company, course or race support. It was the best accidental perfection that you could ask for on a race day like this.

You know it’s good, when come Monday night, without qualification or hesitation, I told my in-laws I would do it again. And since Shakira’s hips are unreliable I will just say that I AM NOT LYING. I would do this race again, go the distance again, and certainly take all the same cast of characters with me, again.

Don’t get me wrong, in the course of 16 hours and 50 miles there are, to be expected, ebbs and flows of energy. Lowi and I, having similar DNA make-up, unfortunately managed to hit our lows at the same time so that made it a little tougher. But our brain-sharing throughout the day often left us laughing to the point of crying.

Get out of my brain!
Let’s start with “Pocahontas” (aptly named by Mary) This woman was the most efficient, hard-core female runner I have ever seen in person. She had these adorable braids (ala Pocahontas) and she didn’t make a single unnecessary movement. Everything was about conservation and hauling-a$$ out there. We were, periodically, curious about how far she must have gone throughout the day. At one point she got close to us and I saw Lowi look over at her and I heard the wheels turning. She was going to ask her how far she’d run. Then she chickened out. After Pocahontas left us in her rarefied dust, I called Lowi out. “You thought about it didn’t you?!”

We both knew what I meant and we fell into crazy laughter. Lowi warned me to “Get out of my head” and on we ran.

Early in the day, Lowi chased me down on the trail when we got separated a couple of times. She was shouting “G” at the top of her lungs and I was oblivious. I don’t know what I was doing or thinking about (advanced calculus in my head?) but I didn’t hear a thing until she’d practically caught me.

Later in the day, it seems I was blessed with super-human hearing though. I started hearing things that weren’t there and freaking everyone out.

We were climbing “the one #$% hill” for the millionth time and there was a couple behind us having a nice conversation. I couldn’t even tell you what they were talking about. All the sudden, I swear, they said my name. I looked back and said “what?”

It was clear, pretty quickly, that I was hallucinating voices. AND the man in the group behind us was about to go full-on triage offering me drinks etc to aid my rapid onset of dementia. Oops, apparently there is a Diddy Mirage and on the trail it’s Mirage Voices.

About midway through the race, we run into Shakira and she’s very animated.. not in a Scooby-Doo sort of way but wildly gesturing. Now she’s Italian and she’s Jill so that’s not totally out of the ordinary but she says: “I just thought I saw a wolf!!!

I reply with, “was it a squirrel?”

Part of my insane dedication to training was in hopes of finally putting those old tapes in my brain to rest.

Part of my insanity was the fear that I wouldn’t be able to. Let’s be honest, running an ultra is a lot about training but it’s almost as much, if not more, about what’s happening between your ears. 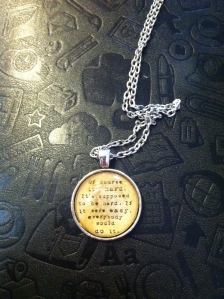 As the necklace Lowi got all of Outrunners says: “Of course it’s hard. It’s supposed to be hard. If it were easy everybody would do it.”

It was hard, it was supposed to be, and WE DID IT!!