Blogger’s Note: Sometimes we get on a roll with a theme and we can’t stop. Somehow this became animal week on our blog. It’s like Animal Planet. Just go with it 🙂

Some time last week I got a Facebook memory notice and one of them was a photo of Stevie Nicks while she was still pregnant with her 25 puppies. OK possibly she only had 7 but I swear she was 1/6 dog and the other 5/6 puppies. When I first saw a photo of the malnourished mama-to-be I thought she had a face only a mother could love.

Boy, was I wrong? After giving birth to her pups, my sister traveled to Nashville to take Stevie Nicks back to her forever home. And in the last couple of years this little mutt has morphed into an adorable pup. She was always sweet as honey but now her outside matches her insides.

It got me thinking about how animals transform with a good home and some love. We’ve all seen countless photos of adopted animals who have thrived once they find the right home.

Stevie is no different.

And it’s not just their looks that change it’s their demeanor.

We adopted Bhakti right after Christmas and she was already on the mend from her rough start. She physically looked good and healthy but she was skittish. She spooked easily, she wasn’t so sure about men, and she couldn’t hold still. For the first few weeks she paced all the time. She hardly slept and if she did it was minutes at a time instead of the usual feline style of hours at a time.

But as the weeks went by and she started to feel safer, her pacing started to slow. When she rested, she would stay down for an hour instead of 10 minutes. And she would sit on a chair next to me and the rare occasion on my lap but only for a few minutes.

In the nearly 4 months since we adopted her she has changed so much. We joke that she’s more like a leopard than a house cat since she leaps unlike anything I have ever seen and her frame is sleek and muscular. And she’s started to sleep at the foot of our bed. She’s not quite a snuggler but with each passing day she is figuring out that this is home and no matter how much I yell about her clawing the furniture, this is forever.

Adopting an adult pet is always different. They seem like old souls when they come into your home. They already know that sometimes adoption doesn’t work out, or they’ve never felt the experience of having a home. It takes them time to warm up and to feel safe. It takes them time to decide whether to trust you. But eventually they do and then their love is serious. They know they’ve been rescued and they are like the genie in the bottle.

They are all in. They are your buddy forever, no matter what. 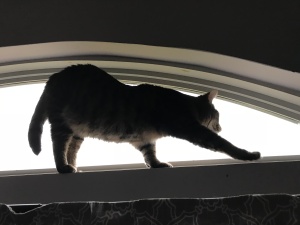 It’s a little different than when you adopt a pet as a puppy or kitten. We have Sir Basil, who went straight from snuggling in a pile of his littermates to our house and while he loves John ( Yes, just John) he doesn’t have the same level of appreciation for the life he has because it’s all he’s ever known.

Both of the adult felines we have adopted have had a quality about them. While Bhakti has a very different disposition than Parsley did both have looked at me in the same way. They look you in the eye in a way that tells you that they know. They know this is better than the street or the shelter or their first home. They know that this time it’s different. They know that this is for keeps. They know, as Meredith Grey would say, you are their person. Watching them grow, relax, and then, really relax is a gratifying movie to watch. It makes you feel like you’ve done something worthwhile in your life. And no matter what you give to them they will give back to you tenfold.