Skip to content
(L): I have been giving a lot of thought to my training and why I run the last month.  One of the reasons I sign up to do these crazy races is because I get to see G.  Of course, I could see her and the rest of the family without running some ridiculous distance, but where is the fun in that?  What I didn’t account for is that G and Swaggy J might have ulterior motives when it comes to inviting me.

This weekend, Swaggy J started hounding me about registering for the Barkley Fall Classic in 2018.  Yes, you read that right, it’s two years away!  This is the kind of stuff they do to me. They dangle something in front of me that seems so far off in the distance that I get tempted.  I, however, did not take the bait this time. Why?  One, I am in the middle of failing my current training schedule and two, I have already heard about Barkley. In fact, G and Swaggy J made me watch a documentary regarding The Barkley Marathons a few months ago. The subtitle of this race is, The Race that Eats Its Young. One of the Barkley races is 3 days and it’s grueling to even watch. The other little tidbit about The Barkley Marathons is that the race director always allows someone to register who he doesn’t believe will actually finish. I told Swaggy J that I refused to be his scape goat, lame duck or whatever you want to call it.  Swaggy J continued to brainwash me with things like, you don’t have to run in the dark, the course is marked well and it’s only 50k.  Swaggy J is a charmer, but I took a deep breath and declined his amazing offer.

Then he sent me a message that said, “we’re signing you up!”  Damn G and Swaggy J!

(G): Often I feel like ultra training is rather involved. It’s planning speed work, hill work, intervals, long distance, tempo runs, strength training. It’s managing the season from early April to late in the year. It’s managing myself in an effort to stay motivated, stay healthy and stay on plan.

But then there are times like these where it’s simple: Shut Up and Run!
I am 25 days away from the Nashville Ultra 50K and the end of our 2016 season. I’m less than 2 weeks out from a 45-mile effort so there’s really not much left to do but run.
I’m not going to change my fitness level, skill or ability much in the next few weeks so it’s just riding the wave to November 5th.

I am looking forward to the race and also to my year-end break from focused training. I am sure I will run in November and December post-race but I am giving myself the rest of the year off to try new things, take a mental break, and hope that come January 1 I am craving the intensity and consistency of a training schedule.

But right now, it’s time to simply run. I took most of the week off after the MOX 12-Hour and Thursday I decided it was time to get back to it. I returned to the regimen with rebounding, core work and heavy strength training. 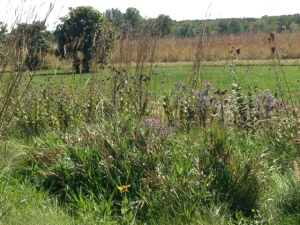 That made me realize I was still a bit rough around the edges from the race. Saturday morning I taught a yoga class and then headed to the park for a 7-plus mile walk.
It was a gorgeous fall day. The temps were cool, the wind was up and the sun was shining. It felt good to be outside and not have any particular agenda but to move.

Sunday, I talked Swaggy into a short 4-miler and he turned it into a full-on sprint at the finish. I was chasing him for the last half mile or so. It was really my fault. We were about half a mile from what I thought would be our stopping point so I pushed the pace up a hill and really started striding it out. I was hurting a bit, however, according to my calculations I was not far from stopping. We hit four miles and when I slowed to a stop Swaggy yelled back to finish it out strong. Turns out we were racing to our front door, which was still a good .3 miles away. Not that far to be sure but when you spent the last half mile pushing it, well, it felt far.

I ended my 4 miles doing the ugly run. My mouth was hanging open, my breathing was ragged and even though I was running as fast as I could I am sure a toddler on a big wheel could’ve passed me with ease.

I lumbered into my driveway to be greeted with Swaggy taking photos of me with his phone. All the while he’s saying, this will be great for the torture report. You can be the judge of that.

Yesterday, I returned to heavy weights and rebounding on the trampoline. But today, it’s back to the motto of the month: Shut up and run!

I was feeling pretty good about the year and my accomplishments and thankful for a “fun run” to end the year. Then late last night Swaggy says, “Hey, you are in for the Barkley Fall Classic, right?!

Swaggy and I will never be accepted or be capable of finishing The Barkley proper so the Fall Classic is its stand in. But let’s not be fooled, it will be a serious race, a serious effort and likely leave us standing on the wrong side of the finish line. Now, instead of ending the year with gratitude and a little laurel-resting I am ending it with a justified amount of trepidation and fear.

Now I really better shut up and run!