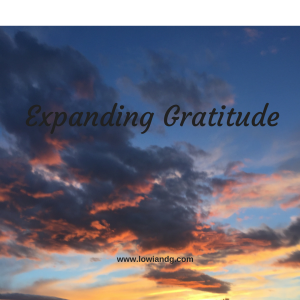 A couple of weeks ago I told you that I was reading a book called, Thank and Grow Rich by Pam Grout and I also devoured Love Warrior by Glennon Doyle Melton during that same time. Two things began resonating with me from these books: the idea that what you think about expands and just doing the next right thing.

In Love Warrior, Melton shares her poignant story of addiction, love, survival and redemption through a lens of such raw authenticity that her pain is palpable. At one point she describes trying to claw her way through the stress and anxiety of her situation while simultaneously trying to make life-changing decisions. We can feel the sense of hopelessness tied to what she feels is a need for certainty. She discovers that what she needs and the only thing she is capable of is just doing the next right thing. What a concept; just do the next right thing.

This idea of doing the next right thing along with expanding what I was focused on began this dance in my head. I wondered what it would be like if I wanted to expand gratitude. So, of course, I thought of the road blocks. Sometimes life is hard and gratitude is even harder. When you are going through a tough time, gratitude isn’t always at the ready.

We, occasionally, fall into the pit and even though we are trying to claw our way out, dirt continues to fall on us, we lose our grip, we fall, we have to get back up. It’s easy to despair and everyone around us would understand if we got out our lounge chair, did a little binge watching on Netflix, and stayed at the bottom of the pit for just a little break. The problem is that while we are down there in the muck we are focusing on the negative. We are expanding the muck.

It made me think about a day when I was traveling awhile back. I had scheduled an early flight so I could be home in plenty of time for after school activities with my kids. I arrived at the airport early, had breakfast, boarded my plane and then we sat — for an hour. I started to get anxious, but I kept telling myself to be grateful that I had plenty of time for my connecting flight in the next city. Before long we were told that the plane had some mechanical issues and we needed to deplane the aircraft for a couple of hours. Frustration began to seep in, but again I tried to stay on the gratitude frequency and mentally told myself that I was grateful they caught the problem before we had issues in the air. Knowing I now was going to miss my connection I called the airline and rescheduled my flight. I continued to breathe and felt blessed that I was able to make the necessary changes so easily.

My next plane arrived but was delayed due to the “broken” plane, which was still at the gate. Now my new flight was wreaking havoc with my day and I had already been at the airport for 5 hours! Again, I chose to breathe and tell myself to be grateful for whatever came my way. It was working and I really didn’t want to spend my day being grumpy about something I couldn’t change anyway.

We left 30 minutes late and I did have to run to meet my connection, but I made it.

Upon boarding my connecting flight I was told there was no more room for carry-on bags. Mine was checked and I was told I could retrieve it in baggage claim (which I was trying to avoid). I had a headache, I had not eaten in hours and I was getting grumpy. I continued to breathe and speak graciously to my seat mates.

In the end, I had two perfectly fine flights and after many hours made it to my final destination. I could see the light at the end of the tunnel, but then it happened. A man who I was walking behind and could not get around slowly meandered onto the train leaving me with the doors shutting in my face. I blew. I actually said out loud. “Could you move any SLOWER?” He did not hear me, thankfully, as he was on the train moving ever so swiftly toward his bags. Another man standing beside me, however, did hear me and as soon as the words left my lips I was annoyed with myself. To add insult to injury this man started laughing and said, “wow! In a hurry?”
I took a deep breath, smiled and said, “you know, I am kind of in a hurry because I am 4 hours behind schedule. My day has not gone as planned, but that was not necessary. I am usually a perfectly pleasant person, but I guess I am ready to be home. I’m sorry for my little outburst.”  He was gracious and said, “don’t be sorry. It’s actually the funniest thing I have seen all day.”

So, what is the moral of this little story? Well, in this case I kept trying to just do the next right thing, which was to be grateful in all of the circumstances. I kept trying to choose the expansion of gratitude because I really didn’t want to be in a bad mood. I wanted to focus on joy and happiness. And you know what? I did. It wasn’t fake. I actually felt calm and joy…until I didn’t. I literally told myself in that moment of ugliness though, “okay, you blew it, but do the next right thing. Don’t stay here.” That man could have chosen to think I was negative and just rolled his eyes at me, but I choose to believe that he was put there right beside me to jolt me back to my mission, which was to expand my gratitude.

Thank you gracious fellow train rider who also had the doors shut in your face. I so appreciated the jolt back into gratitude, your kindness and mostly your laughter. Thank you for helping me to do the next right thing and thank your for helping me to expand gratitude.